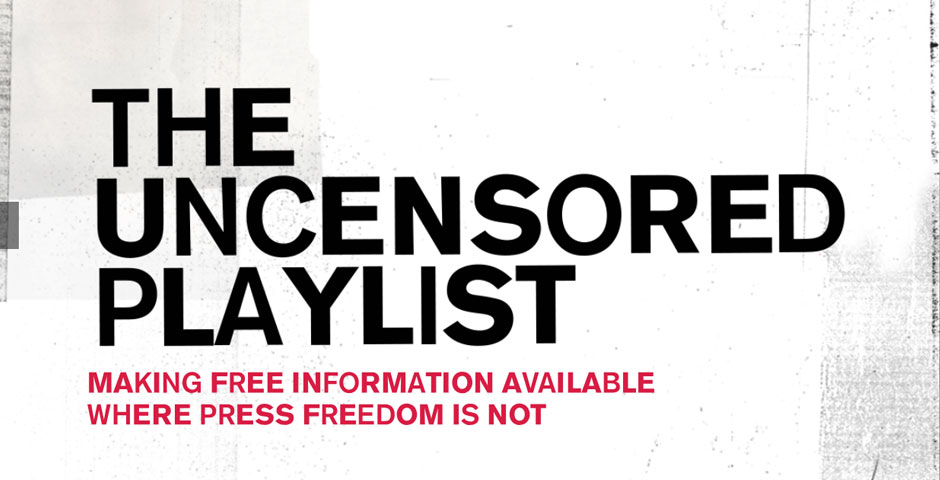 The Uncensored Playlist MediaMonks Best Cause Marketing Campaign
See all the Lovie for Good campaigns
Back To The Winners' Gallery
Share This
Our aim was to inspire those seeking truth around the world that the truth cannot be stopped—no matter how strict press censorship may be.
Describe your Lovie Finalist project. What’s the elevator pitch?

"Online press censorship is on the rise globally, and while press freedom is not available in the world’s most oppressed societies, global music streaming sites are. The idea of The Uncensored Playlist was to use music and streaming sites as a loophole to bypass strict censorship laws, by teaming music artists up with journalists and putting their stories into songs.

These songs, containing the previously unheard stories of journalists, were published to major music streaming platforms — such as Spotify, Apple Music and Deezer — that are accessible in the five target countries."

"Press censorship shows no signs of stopping. Reporters Without Borders publishes an annual Press Freedom Index. The rankings are based on pluralism, media independence, media environment and self-censorship among other factors. The latest list by the Committee to Protect Journalists counts 262 members of the news media imprisoned around the world—the highest number it has ever recorded.

With so many journalists working under oppressive press regimes, combined with the ubiquity of music streaming, we were inspired to use music as a loophole to bring these stories across borders in partnership with Reporters Without Borders Germany."

"Our aim was to inspire those seeking truth around the world that the truth cannot be stopped—no matter how strict press censorship may be.

The Uncensored Playlist shows oppressive leaders all over the world that they can’t silence freedom of information. More than a fundraising or awareness effort, we’re happy to have landed on a unique way—music as a Trojan Horse, of sorts—to allow these censored stories to reach the world.

To maximise this impact, we launched the project on World Day Against Cyber Censorship. Our hope was that it can serve as an inspiration to journalists and citizens alike that no matter the barrier, there are always loopholes to be found."

"It was crucial for us to create something that’s truly relevant for the people. In order to make an idea that’s more than “a good intention,” we needed our songs to be able to transport the content of each article. And to turn this content into pop music people like to listen to.

So, one of the key moments for the team was when we sat together to listen to the first version of the songs and when we all realized: “This works! It transports the message AND it is a real good pop song.”

When you do something that hasn’t been done before it’s always a bit of a leap of faith. Listening to the proof that free journalism can carry on as pop music was an amazing breakthrough moment."

"Using music streaming platforms to convey journalists’ stories in songs was an essential part of the campaign—and served as the key hook in spreading the message. The creative use of the medium was combined with the fact that at least one of Spotify, Deezer or Apple Music was available in each of the target countries.

In total, five independent journalists from China, Uzbekistan, Thailand, Vietnam and Egypt — teamed up with Musical Director Lucas Mayer to turn 10 articles that had previously been censored into 10 uncensored pop songs. This was combined with a website—featuring launch film, biographies and stories from the journalists—that served as hub for all of this information."

"The greatest challenge was to do justice to the brave work of the journalists—to really capture their stories and to make sure to release them in a way they can overcome censorship and be heard.

The moment we uploaded the songs on to the streaming services we knew that censorship had lost. The Uncensored Playlist entered the Top 10 of the Vietnamese iTunes Chart and the project reached many people all around the world—being covered at launch by the likes of Pitchfork and The Guardian. The launch film was shared widely on social media, with hundreds of journalists themselves praising the ingenuity of the project."

Due to the unconventionality of the project, everyone involved had to learn and adapt on the go. We had to create without being able to rely on previous experiences since we were doing something that simply had not been done before.

No music streaming site took down the songs, even though we were using services as a loophole without informing them in advance. The support was very positive. Amazon Music even approached us proactively to feature The Uncensored Playlist as well."