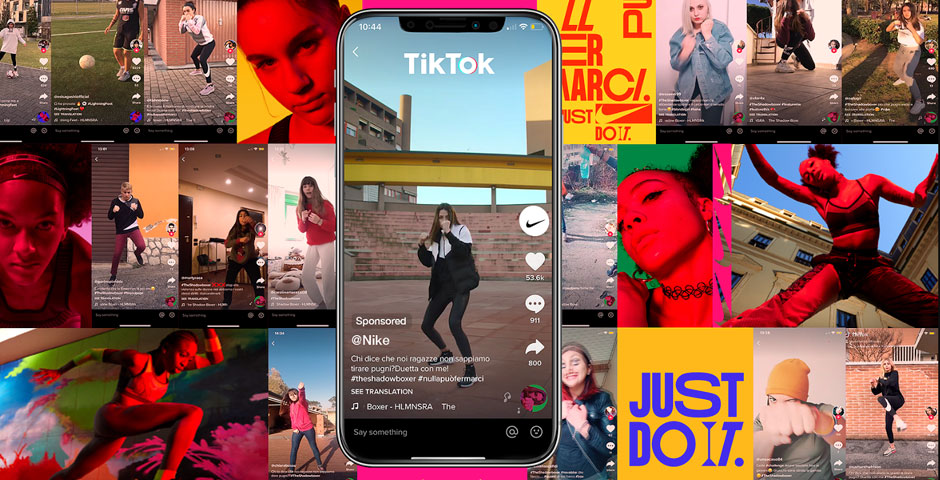 Nulla Puo Fermarci (Stop At Nothing) AnalogFolk Entertainment & Sport
See all the Lovie for Good campaigns
Back To The Winners' Gallery
Share This
Football pundit Fulvio Collovati claimed on national TV that women cannot “speak about tactics” since a woman “doesn’t understand tactics like a man”. Yes, in 2019.
Describe your Lovie Finalist project. What’s the elevator pitch?

In Milan, 55% of young women don’t do any sport at all, and the sporting heroines who should be inspiring them are ignored and objectified. To get young women moving we created a campaign for Nike that saw Nike’s Italian sports-heroines working in concert with Tik Tok megastars to choreograph sport-meets-dance routines. Three infectious, addictive dance routines were made up of sports moves and techniques and used by TikTok influencers to get their followers to join in. Then we watched as the challenges were viewed 20M+ times, 46.7k dance challenges were completed and Milan got moving again.

Italy has a specific and significant problem with its perception of sportswomen.

They are rarely seen or celebrated. When they are, they’re stereotyped, sexualised and objectified. So much so that football pundit Fulvio Collovati claimed on national TV that women cannot “speak about tactics” since a woman “doesn’t understand tactics like a man”. Yes, in 2019.

In Milan – a key Nike city – 55% of women between 14 and 24 don’t do any sport at all. Why would they, when female sporting heroes are either invisible, objectified or vilified as unfeminine?

Nike challenged us to get 150,000 young Milanese women moving by using social, in a way that would cement the brand’s status as the champion of women in sport – on every level. Nike wanted a campaign that would not only be talked about and engaged with, but would also create real-world action with far-reaching effects.

The brief we received told us that young girls in Milan weren’t moving, however, our research showed that this wasn’t true. When we looked into it we discovered that they were moving. Just not in the traditional 'sport' sense, or in the traditional sport places. They were moving to take part in dance challenges at home, in the playground, around friends' houses, and sharing on TikTok. So the challenge became about showing this audience that the moves they were doing weren't that far removed from the moves you'd do in football, boxing, basketball etc. Which led us to creating the sport inspired TikTok dance challenges. To get them a step closer to getting back into more traditional sports.

The music and video app TikTok has taken over the internet, surpassing all other downloads and acquiring more than 500 million active monthly users. It’s a phenomenon, encouraging users to post footage of themselves performing and handing the baton to their followers to follow suit.

This campaign was about getting young Milanese woman to learn new sports, through the prism of their current social behaviours – dance challenges.

The target audience in the campaign was vastly different to Nike’s customary audience; they were young women that didn’t see themselves as athletes and weren’t necessarily into sport. As such we needed to encourage Nike to think and act differently.

Parallel to this, we had the additional challenge that we were targeting people that were beyond physical contact. They couldn’t touch or feel Nike and so we had to come up with a compelling campaign that championed audience engagement first.

Stop at Nothing was also the first time that TikTok had entered into a brand partnership on this scale and it was the first branded takeover of the platform. Consequently, there was a plethora of operational challenges that we had to overcome alongside TikTok as the campaign progressed, from developing assets, to effectively targeting the right audience.

About the Entertainment & Sport category

Social media services and platforms centred around the entertainment world, including film, television, sport, events, and video games. Platform agnostic – enter any and all social media that best exemplify your work.