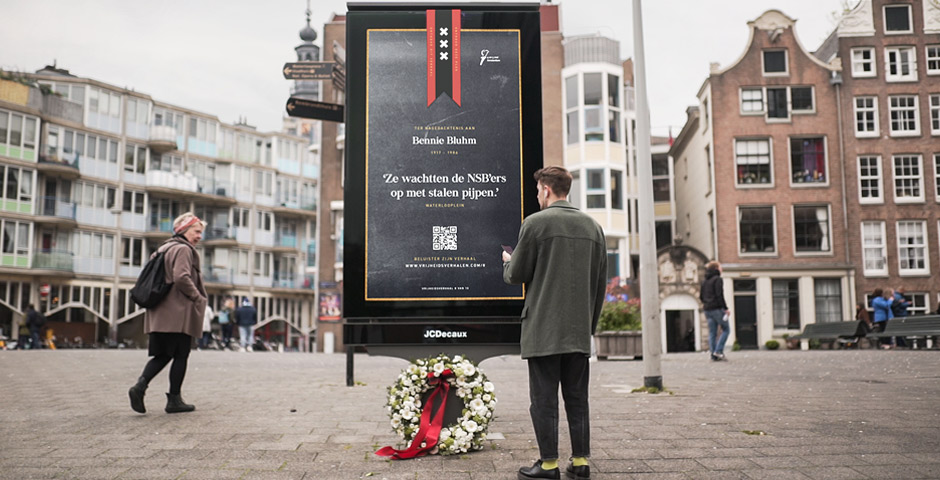 Memorials of Amsterdam N=5 Mobile & Experiential Marketing
See all the Lovie for Good campaigns
Back To The Winners' Gallery
Share This
While the city stood still and silent in memory those who fell in World War Two, we noticed that Out of Home ads were still running. In the context of the moment, the ads seemed intrusive and disturbing.
Describe your Lovie Finalist project. What’s the elevator pitch?

On every Amsterdam street corner there are stories from the Second World War. The streets bear silent witness to acts of heroism and resistance, large and small. These stories are too important to forget, yet are threatened with extinction. On Remembrance Day, May 4th, Memorials of Amsterdam turned outdoor adverts into temporary interactive memorials to tell these stories and honour the fallen. True to the city-wide atmosphere of quiet commemoration, the ads were also silent.

On May 4th 2017 we attended a quiet, respectful Remembrance Day service. While the city stood still and silent in memory those who fell in World War Two, we noticed that Out of Home ads were still running. In the context of the moment, the ads seemed intrusive and disturbing. This inspired us to silence the ads and turn them into memorials to the people who fought for our freedom.

Usually people just walk straight past outdoor advertising. Our objective was to make them stop and take notice of the memorial. To give them goosebumps. We created more impact by telling real war stories in places where passers-by would walk on a daily basis. For instance: nowadays Amsterdam Central Station is a gateway for thousands of travellers, but back in 1945 it was a warzone where soldiers lost their lives and citizens feared to tread. The stories came alive as 3-D sound experiences told from an eye-witness point of view. In 1945 a brave woman stepped into the crossfire at Central Station. In 2019 listeners could literally hear her footsteps and the bullets flying past her head.

The day after Remembrance Day, several other big cities such as Den Haag, Rotterdam and Utrecht expressed a huge interest in our idea. This project is very scalable, so in 2019 we remembered fallen war heroes throughout the Netherlands.

Second breakthrough. Every year there’s a silent march through Amsterdam to the National Remembrance Monument. Our mayor quietly leads thousands of children and their parents. This year the march passed by our memorials. And even though our project wasn’t in the original schedule, the mayor, several politicians and other participants stopped to quietly contemplate them. This of course was a great honour.

Very much so. We wanted to create impact with a medium that’s usually ignored. Passers-by actually stood still in front of Digital Out Of Homes and interacted with the medium. We worked closely with Kinetic and JCDecaux, researching the best way to get people from out of home to mobile. We chose QR-codes because almost every smartphone can scan them. On the mobile site we created a walking route, so people could walk from the first Digital Out Of Home they found to the other memorials. A new way of telling stories on the streets.

Challenge Since we were telling stories based on specific locations, we had to exactly match them with a map of Digital Out Of Homes. Because the subject matter is so sensitive we had to talk to descendants, research all the stories and portray them respectfully based on facts. Therefor we asked renowned Dutch historian Bianca Stigter. Rewarding On the 4th of May we were in the city. One old woman, a survivor of the war, wept in front of the memorial to Dutch resistance fighter Walraven van Hall as she told us, “70 years ago, this man saved my life.” Rewarding 2 We stood eye-to-eye with resistance fighter Isa Baschwitz’s son as he expressed his deepest gratitude. It was incredibly moving.

We were tempted by all the digital possibilities of Digital Out Of Home. You can create stunning visuals or use disruptive interactive technology. But the tone of this project was very modest and honourable. We learned that keeping it honest and respectful gave the memorials all the more impact.

While the city stood still and silent in memory those who fell in World War Two, we noticed that Out of Home ads were still running. In the context of the moment, the ads seemed intrusive and disturbing.

About the Mobile & Experiential Marketing category

Integrated Mobile Experiences must include at least 2 different media types, one of which must be designed for a mobile device. Entries should highlight unique communication between the mobile device and the additional media. Other media types can include online, print, outdoor, TV, guerrilla or radio.