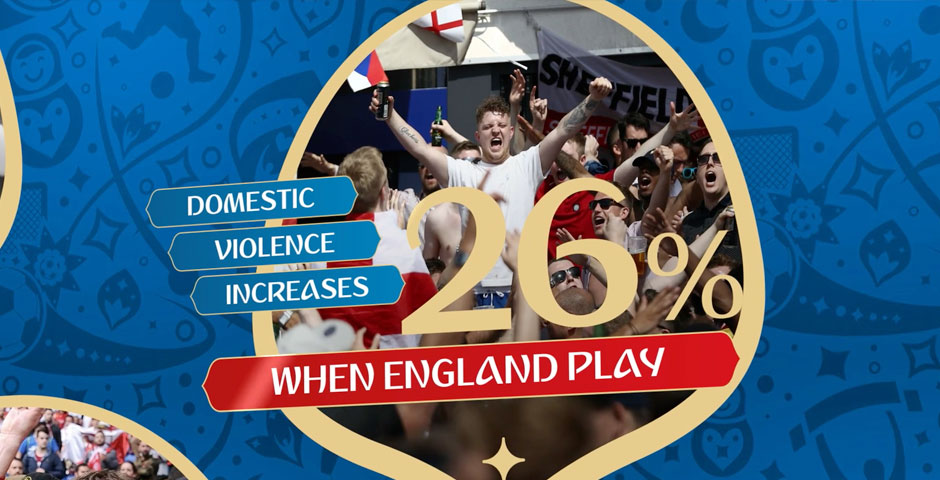 #StopItComingHome STACK Public Service & Activism
See all the Lovie for Good campaigns
Back To The Winners' Gallery
Share This
Solace have supported women and children who face domestic abuse for over 40 years. But most of their energy is spent dealing with the after-effects of domestic abuse.
Describe your Lovie Finalist project. What’s the elevator pitch?

Before the 2018 World Cup a research paper reported that domestic violence increased when England played, and increased even more when they lost. But the only thing people want to discuss in a World Cup is the football.

With no media or production budget we hijacked the football conversation taking the official statistics from every England game, and then added our own domestic violence stat. We tweeted everyone from presenters to politicians, journalists and bloggers – asking them to re-tweet. And they did, sharing our message with thousands of fans. We even got the attention of an outdoor agency who took our campaign into the real world.

Solace have supported women and children who face domestic abuse for over 40 years. But most of their energy is spent dealing with the after-effects of domestic abuse.

When a study from Lancaster University revealed that domestic violence rose in a World Cup, Solace were desperate to raise the issue before the event. And campaigns like #MeToo showed that when you create a big enough noise around an issue, and get traction, people listen.

The domestic abuse report was featured in Harper's Bazaar and the Independent. But here you are preaching to the converted. We needed to reach the fans themselves.

Most domestic abuse campaigns feature distressing images of women who have been abused. But this would just be ignored by football fans - especially in a World Cup.

But by hijacking the thing they were interested in (the performance statistics), we could subtly move the conversation from football to domestic abuse.

Our campaign was being successfully re-tweeted and shared, and was building traction. But when 8 Ourtdoor Media saw the campaign and offered us outdoor advertising everything changed. After every game new stats were shown on posters up and down the country, which got everyone talking.

Every penny Solace makes goes towards helping and housing victims of domestic abuse. They have no money for expensive photo shoots, films or media placements. Our Twitter idea could be created simply in-house, refreshed easily to stay topical and build momentum, and generated it's own reach.

The big issue was timing. The report came out two days before the World Cup began. We had 48 hrs to create the campaign, build the assets, target our audience and get everything live.

The power of leveraging a moment. We knew that we had a good idea but we couldn't have dreamed about the amount of interest we'd get just by leveraging the one thing that's on our audience's mind.