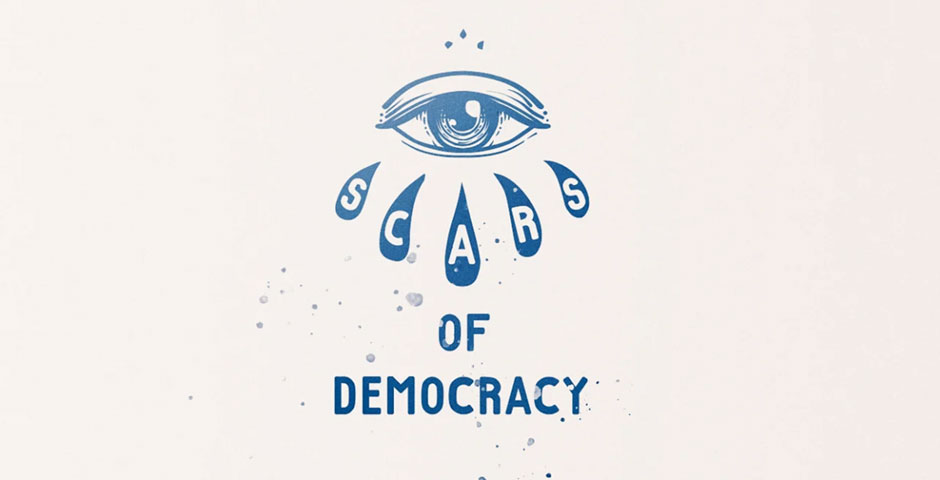 Scars of Democracy SERVICEPLAN GERMANY Best Visual Design
See all the Lovie for Good campaigns
Back To The Winners' Gallery
Share This
What’s new is that a number of protagonists among them are now acting more openly against critics. Repressively and aggressively. With both words and images.
Describe your Lovie Finalist project. What’s the elevator pitch?

The "right to exercise artistic freedom" under Article 19 of the UN Convention for Human Rights is increasingly under threat worldwide. As one of Europe's most important urban art fairs STROKE Artfair 2019 chose to celebrate this internationally ratified human right with a special exhibition of "Scars of Democracy" – a series of political portraits by street artist “capo's finest”. The series includes political figures adorned with tattoos representing their decisions and unfinished business. For the first time, street art was transformed into a virtual vernissage: digitally deciphered in an Augmented Reality-App where users could reveal the story (and truth) truth behind each tattoo.

Politicians have long tried to keep things from the public, even in democratic systems. What’s new is that a number of protagonists among them are now acting more openly against critics. Repressively and aggressively. With both words and images. We as communicators – who live with and from the values of Article 19 – wanted to make a clear statement and show people that artistic freedom is not a luxury of humanity, but rather a fundamental right. One that will always be worth fighting for.

Street art has long been seen as a medium for expressing social injustice or political statements: bold, larger than life statements for all to see. We wanted to bring this offline world online – to integrate this sub-culture with today’s digital culture and reach a wider audience by doing so. And then there’s the specific message: taking a stand in politics and articulating it is a human right. A human right that generations before us fought to have. With “Scars”, we wanted to engage users in the fight for artistic freedom by taking it straight to their device.

What struck us during the exhibition was just how much time the users invested in our project. In the current climate of bite-size news and information consumption we were absolutely amazed to see visitors spend up to half an hour in front of the portraits, screening the politicians and using the app to reveal their hidden secrets. This sort of intense user exchange is something we are sure many museums would like! Maybe augmenting the world’s more famous art with VR/AR is the future: where the exhibition is only the gateway to the overall experience. We certainly think so.

During the STROKE Art Fair exhibition itself, huge canvases depicting each political portrait were displayed for attendees to view – but the true depth of the experience and message was only possible with digital augmentation … literally.

We developed the SCARS AR app to allow users to interact with the portraits on a whole new level. Visitors at the art fair could watch out for our artworks, hold their smartphones in front of the tattoos to scan them and tap on the scanned image to see the story (thoroughly researched video snippets from a wide range of international news outlets) behind the tattoo.

Our greatest challenge was making the SCARS AR app usable and accessible for a wider audience than just those attending the art fair. We achieved this through “Couch Mode”. This app feature enabled users to virtually place the protagonists onto their home walls and discover the stories behind each tattoo. The immersive experience was made possible thanks to Apple’s top notch ARKit 2.0. Visual Inertial Odometry tracks the world around the user’s device and transforms the data into a virtual object. The result: no physical artworks required! As for the reward – seeing more than 8000 visitors get actively involved in the AR-exhibition!

Honestly, we weren’t expecting to see the level of unfamiliarity with these “new” immersive technologies (AR/VR) that we did. For many people, it was the first time they were confronted by this mobile AR technology. We heard things like: “I didn’t know that my mobile enables VR applications! Good to know!” Some users learned and experienced something completely novel to them. We saw this as positive since it also shows that our app and exhibition experience was popular across the generational range and with any walk of life.

About the Best Visual Design category

Mobile sites or apps that offer the best visual design: beautiful, emotional, and appealing to the senses.