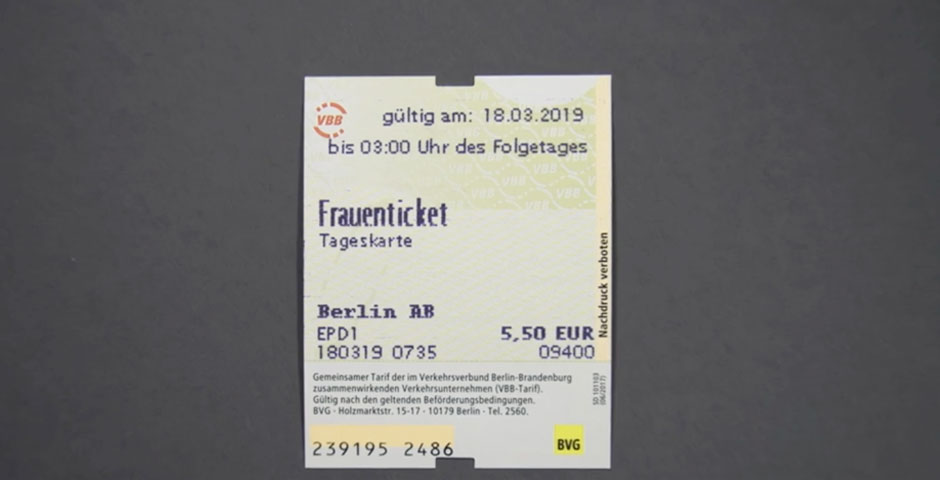 MIND THE GAP SERVICEPLAN GERMANY Best Cause Marketing Campaign
See all the Lovie for Good campaigns
Back To The Winners' Gallery
Share This
Despite Germany’s reputation as a socially progressive country, it has the 2nd largest gender pay gap in Europe. Women in Germany are paid an average of 21% less than men, according to the Federal Bureau of Statistics.
Describe your Lovie Finalist project. What’s the elevator pitch?

March 18th is 'Equal Pay Day' in Germany. Only a few realise that Germany has a gender pay gap of 21% - the 2nd largest in Europe. To highlight this inequality, BVG created the world's first women's public transport ticket allowing women to travel for 21% less. BVG brought the Women´s Ticket to over 600 touch-points across Berlin and unveiled a special Ticket Machine in the city center.The machine used gender recognition technology to identify women and offer a range of 21% discounted tickets - incl. yearly tickets (savings of 160 euro).The Ticket brought the gender pay gap discussion into global news. BVG Recruiting was able to underline their strict policy of equal pay for equal work.

Despite Germany’s reputation as a socially progressive country, it has the 2nd largest gender pay gap in Europe. Women in Germany are paid an average of 21% less than men, according to the Federal Bureau of Statistics. Equal Pay Day was established in 1988 to draw attention to this inequality but has traditionally achieved low awareness. Because it falls just a few days after Women’s Day, Equal Pay Day receives very little attention and coverage from the German media. BVG has a strict equal pay policy but traditionally struggles to attract female applicants.

By creating the Women’s Ticket and the resulting Press and Social coverage, BVG was able to shine a light on inequality while also providing a meaningful solution: a recruitment drive offering jobs with equal pay for equal work. BVG wanted to take a stand for women’s rights and create awareness and discussion around the gender pay gap issue. By shining a light on this issue, BVG was also able to draw attention to their strict equal pay policy, standing as an example to other businesses to address imbalances and close the gender pay gap once and for all.

The breakthrough moment for us was when the BVG Women’s Ticket story was picked up by the international press. The New York Times, Guardian, BBC, Reuters and many more praised the initiative - UN WOMEN retweeted the story, and on Equal Pay Day the 21% Gender Pay Gap issue was a top story on every German TV news broadcast. Overall the project had 6,7 Billion media contacts generating an equivalent media value of 107 Million Euro.

The Women’s Ticket was a symbol of the inequality in Germany that made the issue tangible. The ticketing system also allowed us to use the printed receipt to add a special message: Instead of paying 21% less earn 21% more. Apply now at bvg.de/careers
The technology was essential in building the story; the specially modified Women’s Ticket Machine used the latest facial recognition technology to identify women and unlock the full range of 21% discounted tickets - including monthly and even yearly tickets. The machine was an icon of the campaign and the backdrop for BVG’s Press conference on Equal Pay Day.

1.Gender definition is a sensitive issue- The 21% discounted Women's Ticket was available to all people that identify as women. With our special Women's Ticket Machine, our biggest fear would be that the technology might not recognise a woman for whatever reason. But fortunately the technology was incredible, and the Women's Ticket Machine did a flawless job on the day. 2.Seeing the press covering the Women’s Ticket action in every German newspaper, online edition, and TV news broadcast. Most rewarding was to see the growing awareness around the issue - On March 18th search queries for ‘Equal Pay’ on Google.de increased by 1,900% compared to previous years on Equal Pay Day.

It was surprising to see how positively men reacted to this initiative. We always think that the Gender Pay Gap is merely unfair to women, but it is unfair to everyone. The pay gap in Germany means taking 21% out of household income, out of family livelihoods. So on the day, we saw a lot of men bringing their wives, mothers, and daughters to the machine to buy a yearly ticket. Our social media tracking and consumer testing also showed a strong positive sentiment amongst men towards the BVG Women’s Ticket initiative.